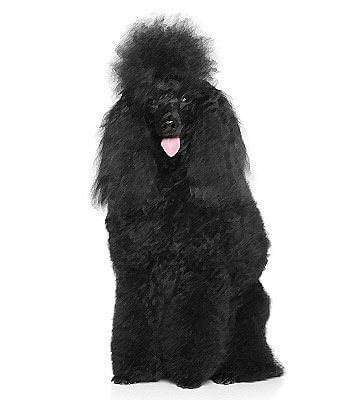 Although many people associate the standard poodle with French culture, the dog is actually believed to have originated during the 1400s in Germany, where he was used predominantly as a water retriever. The name comes from the German word pudel, which means to splash in water. The standard poodle is the oldest variation of the three different poodle sizes, and he was used by German, French and Spanish hunters as a gun dog, a retriever of waterfowl and a seeker of truffles. The breed became popular in France when he began performing in circus rings. The American Kennel Club recognized the standard poodle as a member of the non-sporting group in 1887.

The Poodle is a medium-sized dog breed with square proportions. It is famous for its curly coat, which is dense and wiry. The coat needs frequent brushing and clipping, especially show poodles' coats.

The Poodle is among the most intelligent, obedient, smart and active dogs. It needs daily exercise in the form of a moderate or long walk. It also likes to swim. It's friendly towards everyone, whether it's dogs, children or strangers.

The standard poodle is the largest of the three poodle sizes. The standard poodle stands more than 15 inches tall at the shoulders and weighs between 40 and 45 pounds. The curly coat may be any solid color, including black, white, gray, blue, silver, red, brown, café au lait, apricot or cream. The ears hang downward and the tail is carried high. The Poodle is a medium-sized dog breed with square proportions. He is famous for his curly coat, which is dense and wiry. The coat needs frequent brushing and clipping, especially show poodles' coats.

The standard poodle is highly intelligently and easily trained. They have a sense of humor and enjoy taking center stage in their family’s attention with clownish antics. Of the three different poodle variations, the standard poodle is the calmest. They get along well with children and other pets in the household, and they thrive on the companionship of the their owners. They are excellent therapy dog candidates. They are usually friendly toward strangers. They are enthusiastic participants in walks, games of fetch and just about every other family activity. The Poodle is among the most intelligent, obedient, smart and active dogs. He needs daily exercise in the form of a moderate or long walk. He also likes to swim. He is friendly towards everyone, whether it's dogs, children or strangers.

The curly locks of a poodle's coat tend to tangle and mat easily. Combing through the coat daily will minimize these knots. Some owners opt to have their poodles clipped by a groomer every six to eight weeks. Others favor the longer cords that form naturally as the curls grow when the coat is left untrimmed. The ears should be inspected every week, and they should be kept clean and dry to prevent infections. Brushing the teeth as part of the daily grooming routine will significantly reduce the amount of tartar buildup.