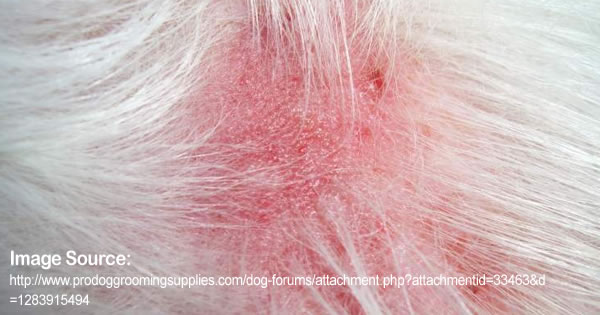 Pyoderma, sometimes called skin infection, is the medical term for pus in the skin. This pet health problem is most often caused by bacteria, and it is much more common in dogs than in cats.

How Pyoderma Affects Your Pet

Most commonly, bacterial skin infections occur due to the presence of other conditions. Some dog and cat health problems that predispose pets to developing pyodermas include allergies, thyroid disease, Cushing's syndrome, other systemic diseases and skin parasites. When the skin is damaged due to some health problem, it becomes more vulnerable to bacterial infection. As bacteria invade the damaged skin areas and replicate, they cause inflammation and further tissue damage. Pets often make this damage worse by scratching or biting at the itchy, infected skin. While skin infections can occur anywhere on the body, areas that are warm and moist are especially vulnerable. These areas include folds of skin, the gaps between toes and the spaces under the legs. Additionally, puppies frequently develop pyoderma in areas that do not have a lot of hair. This type of infection is called puppy pyoderma. In cats, skin infections on the chin are common, and this condition is usually called feline acne.

Treatment for pyoderma involves antibiotics and grooming. Animals with superficial pyodermas usually require 21 to 30 days of oral antibiotics. Pets with deep pyodermas typically require at least 60 days of systemic antibiotic therapy. In all cases, antibiotic treatment should be continued until the affected animal's symptoms have been gone for at least seven days. In addition to oral antibiotics, a pet with skin infections requires regular baths. Bathing with medicated shampoos helps to reduce the number of bacteria on the skin, relieve itching and irritation, remove crusting and oils and reduce odor. In addition to bathing, affected pets, especially long-haired animals, may require clipping. This is because hair can be irritating, and it can trap debris and make grooming more difficult. With severe infections, surgery may be necessary to clean and drain the affected area. The attending veterinarian will need to diagnose and treat any underlying condition that could be causing the pyoderma in addition to treating the infection itself. If the underlying condition is not treated, the infection is likely to reoccur.

Members of all canine and feline breeds can develop pyodermas.