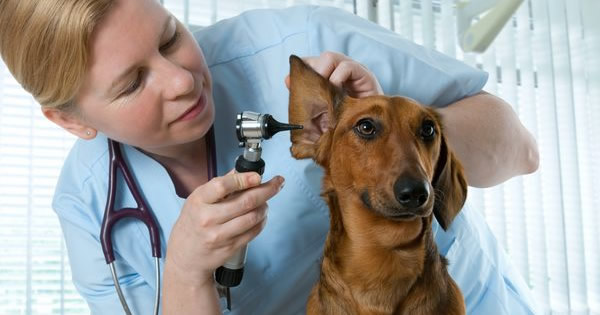 The most common ear disease in pets is otitis externa. This is an inflammation of the external ear canal, the part of the ear between the eardrum and the outer surface of the ear. The disease has a number of possible causes and can become a chronic problem in susceptible animals.

How Otitis Externa Affects Your Pet

Due to some type of irritation in the outer ear, the glands in the area begin to overproduce wax. This leads to greater irritation and creates an environment that attracts bacteria and fungus. Over time, the skin in the area thickens in response to inflammation, and the ear canal narrows. This worsens the inflammation and makes the pet more likely to develop bacterial and fungal infections of the ear. Otitis externa is a complex pet disease, and veterinarians must consider four types of factors when diagnosing and treating the condition. These are primary, secondary, predisposing and perpetuating factors.  Primary factors, including the following, directly cause this pet health problem: Parasites, Foreign bodies, Tumors, Autoimmune diseases, Endocrine diseases, Irritants and Allergies. Secondary factors, such as bacterial and fungal infections, complicate the disease. Predisposing factors, including the following, make pets more likely to develop otitis externa: Floppy ears, Narrow ear canals, Excessive wax secretion, Excessive hair in the ears, Immune system suppression, Systemic disease, Excessive moisture in the ear canal and Skin damage in the ear canal. Perpetuating factors, such as middle ear infection and damage to the ear canal, tend to make the disease harder to cure.

If the condition is caused by a tumor or a foreign body, the offending structure must be removed and the inflammation treated with topical medications. In most other cases, topical medications and ear cleaning are sufficient to alleviate the symptoms of otitis externa. However, any pet that experiences more than two ear infections in a six month period should have a full work up to look for underlying health issues.