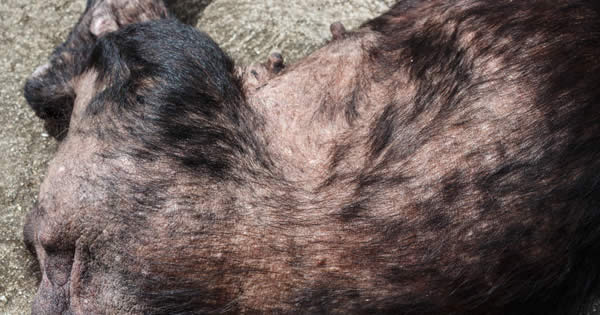 Scabies mites are usually spread through direct contact with infected dogs, but they can also be spread through contaminated bedding or grooming equipment. After exposure, it takes 10 days to two months for symptoms to become apparent. The length of this incubation period is determined by the number of mites transmitted, the site of the initial exposure and the response of the individual dog. It is possible, though uncommon, for dogs to be infested with mites and not show symptoms. These asymptomatic dogs can still spread scabies to other dogs. Scabies in a pet is characterized by extreme itching. This itching causes affected pets to scratch, bite, lick and rub their skin to the point of damage. This damage can be severe, and it can predispose affected pets to bacterial and yeast infections. Most commonly, scabies lesions appear first on the belly, chest, ears, hocks and elbows. If not treated, they spread to the rest of the body. In very severe cases, the damage caused by generalized scabies can cause affected pets to become emaciated and die. A similar condition, called feline scabies or notoedric mange, occurs in cats. Caused by mites of the species Notoedres cati, this cat health condition is much rarer than canine scabies.

Common symptoms of this pet health condition include the following: Scratching, Patchy hair loss, Crusts, especially on the tips of the ears, Biting or chewing at the skin, Raw sores, Enlarged lymph nodes in severe cases and Emaciation in severe cases.

Because of the highly contagious nature of this pet health problem, all dogs in contact with an infected dog should be treated for scabies. Most commonly, scabies is treated systemically with macrocyclic lactones. Topical treatments, including lime sulfur dips, are also effective in the treatment of scabies. However, these methods are labor intensive and time consuming, so most pet owners and veterinarians prefer systemic treatments. Systemic treatments are typically safe and convenient, but veterinarians must consider certain factors before choosing the correct drug for a particular dog. For example, it is important to know a dog's heartworm status before choosing a treatment for scabies. This is because some drugs used to treat scabies, such as milbemycin oxime, can cause a fatal allergic reaction in heartworm positive dogs. Another important point to consider when choosing a treatment for scabies is ivermectin sensitivity. Collies and other herding dogs are often dangerously sensitive to ivermectin, an effective scabies treatment, and other drugs of this class. Dogs taking the oral anti-flea medication spinosad also tend to be sensitive to ivermectin. Selamectin, a topical macrocyclic lactone, is considered safe for use in most ivermectin-sensitive dogs. In addition to treatments aimed at eradicating the mites, affected pets usually need medications to treat itching and secondary infections. These often include medicated shampoos or sprays, oral antibiotics and corticosteroids.

Scabies affects dogs of all breeds.