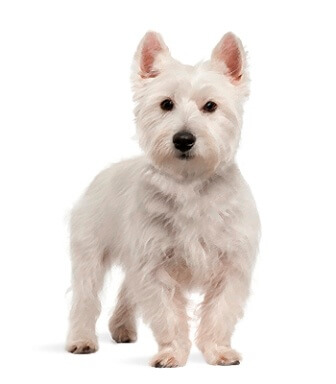 The West Highland White Terrier is a small and compact dog with a sturdy appearance. Its body is longer than tall and its legs are short. The head appears rounded with a short muzzle. Westies have wide set, erect, small ears. Their coat is all-white and is slightly coarse to the touch. The coat should be brushed regularly and requires occasional trimming.

The West Highland White Terrier is a friendly and confident dog breed. They are eager to please and devoted to their human families. Westies get along well with children and make good playmates. Like all terriers, they can be stubborn and independent, especially when they want to explore. Westies enjoy being outdoors and need to be taken for daily walks. They also like to play and dig. If given enough exercise and assertive leadership, the Westie is friendly towards other dogs and strangers. But if they're lacking leadership, they like to pick fights with other dogs.

The sturdy and compact West Highland terrier stands at a height of 10 to 11 inches at the shoulder and weighs between 15 and 22 pounds. The characteristic white coat is medium in length and the hairs are straight and hard. The triangular ears stand erect and the short, tapered tail is carried upward.

The coat of a West Highland terrier sheds very little, but this makes it prone to matting. Daily brushing and combing are essential to prevent mats from forming. The coat should be trimmed every four months by a professional groomer to maintain a neat appearance, and it should be stripped twice a year. The teeth should be brushed daily to prevent tartar accumulation and periodontal disease.