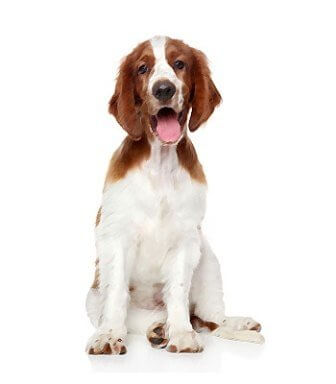 The Welsh Springer Spaniel, or Welshie, is a robust medium-sized spaniel. Their heads are round with a broad muzzle. Their ears are large and pendant, and are slightly feathered like most spaniels. They have medium-length silky coats that are either wavy or flat. The coat is relatively easy to groom but needs to be brushed regularly. The ears should be checked regularly to prevent infection.

Welsh Springer Spaniels are friendly, sociable and outgoing. They bond deeply with their families and are affectionate and loving. This dog breed has moderate or high energy levels and should be taken out for a daily run, jog or walk. Welshies are good with kids, dogs, pets and strangers - they are everybody's darling.

The medium-sized and muscular Welsh springer spaniel weighs between 35 and 55 pounds and stands at an average height of 17 to 19 inches at the shoulder. The coat is medium in length and may be wavy or straight. Feathering appears on the chest, abdomen and the backs of the legs. The coat colors are white and red, and they may be displayed in any pattern. The ears hang downward and the docked tail stands erect.

Keep a Welsh springer spaniel’s coat free of tangles and mats by brushing or combing it two to three times a week. This should also be done whenever the dog concludes a day on the hunting trails. The ears should be inspected weekly and kept clean and dry to prevent infections. Make home dental care a part of the grooming routine by brushing the teeth three times a week to prevent periodontal disease.