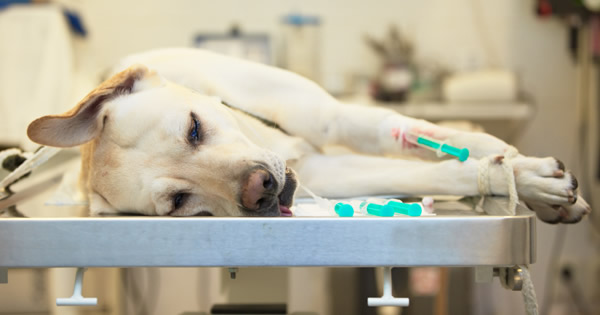 Myasthenia gravis is a neurological pet disease in which communication between skeletal muscles and nerves breaks down. There is an acquired form of the disease that occurs in adult dogs and cats as well as an inherited form that occurs in puppies and kittens.

How Myathenia Gravis Affects Your Pet

Communication between muscles and nerves occurs in the spaces, called neuromuscular junctions, between nerve cells and muscles. To communicate with its adjacent muscle, a nerve cell releases a chemical, called a neurotransmitter, into the neuromuscular junction. Receptors on muscle cells take up the neurotransmitter. This triggers a muscular response. Once the message is transmitted, the body produces an enzyme that destroys any remaining neurotransmitter in the neuromuscular junction. In pets with congenital myasthenia gravis, the receptors that respond to the neurotransmitter acetylcholine are absent, and in those with acquired myasthenia gravis, the immune system attacks and destroy acetylcholine receptors. Due to lack of acetylcholine receptors, affected animals suffer from muscle weakness and fatigue. The reasons for immune-mediated receptor destruction are not always clear. In approximately one quarter of cats with this pet disease, this destruction is related to the presence of a thymoma, a tumor of the thymus. Thymomas occur much more rarely in dogs with myasthenia gravis.

Symptoms vary on pets and are sometimes limited to one or two muscle groups. In many cases, symptoms wax and wane, and they often improve with rest. Some common myasthenia gravis symptoms include the following: Generalized muscle weakness, Weakness in the muscles of the face and eyes, Voice changes, Sleeping with the eyes open, Drooling, Exercise intolerance, Difficulty swallowing, Difficulty standing, Coughing and Regurgitation and Collapse.

In most dogs with the acquired form of myasthenia gravis, the disease resolves spontaneously within 18 months, so treatment is based on alleviating symptoms and preventing complications. Acetylcholinesterase inhibitors and immunosuppressants are two types of medications that are particularly useful for controlling symptoms. Acetylcholinesterase inhibitors stop the enzyme that destroys acetylcholine in neuromuscular junctions. This helps alleviate symptoms caused by low numbers of acetylcholine receptors. Immunosuppressive drugs, including corticosteroids, help stop the immune system from destroying acetylcholine receptors. While only dogs with severe or resistant disease require immunosuppressive drugs, the majority of cats with myasthenia gravis require long-term immunosuppressive therapy. Animals suffering from complications due to myasthenia gravis may require nutritional support, adjustments to feeding style, ventilation, antibiotics or other treatments for their specific health problems. In animals with thymomas, surgery to remove these tumors usually resolves the myasthenia gravis. Radiation therapy may also be helpful in some cases.