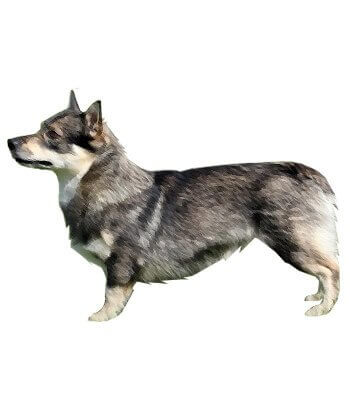 The Swedish vallhund was once called the Viking dog because it travelled on Viking ships between Sweden and Wales during the 800s. Mystery continues to abound regarding the dog’s relation to the Welsh corgi that it resembles. In its native Swedish homeland, the Swedish vallhund served as a herder and watchdog on farmsteads until it faced near extinction by the close of World War II. The first Swedish vallhunds to enter the United States arrived in 1985. In 2007, the American Kennel Club recognized the Swedish vallhund as a member of the herding group.

The Swedish Vallhund is a small dog that is sturdy and muscular. Vallhunds are set low to the ground because of their short legs. They have powerful, athletic legs and strong necks. Their muzzles are rather long and they have large erect triangular ears. Their coats are short and easy to groom. The coat should be brushed regularly. Bathe only when necessary.

The Swedish Vallhund is a friendly, sociable and alert dog breed with close bonds with humans and are easy to train. They are loving and affectionate and are fond of children. The Vallhund has high energy levels and needs plenty of exercise outdoors. Vallhunds are very protective and may be territorial. That's why they may be aggressive or reserved with other dogs or people they don't know.

The stocky Swedish vallhund stands at a height of 11,5 to 13,5 inches at the shoulder and weighs between 20 and 30 pounds. The double coat is medium in length and exhibits a sable pattern of any color from grey to red, with or without white markings on the paws, forehead, chest or neck. The tail may be long, stubbed or naturally bobbed. The ears are pointy and stand erect.

The energetic Swedish vallhund makes a playful companion for families with children. They are affectionate, intelligent and entertaining. The breed is social toward strangers and other animals. Swedish vallhunds thrive on activity, including hiking trips and dog sport competitions. They are easy to train and eager to please. Swedish vallhunds make alert, vocal and effective watchdogs.

Swedish vallhunds live average lifespans of 12 to 14 years. The Swedish vallhund is generally a hardy breed. The few health conditions that have been noted in the breed include progressive retinal atrophy, patellar luxation and hip dysplasia.