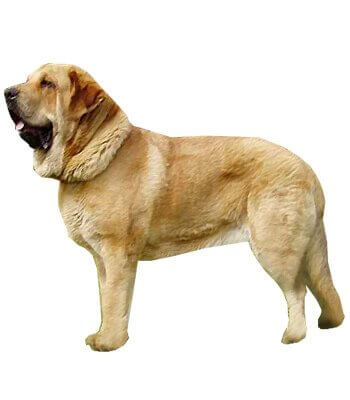 The Spanish Mastiff, also called Mastin, is a very large, powerful breed with a rectangular body and an overall muscular and athletic appearance. Spanish Mastiffs have large heads with broad muzzles and strong jaws. Their ears are v-shaped and pendant. There are two regional varieties of the breed: The Mastin Pesado, the heavier type from the North, and the Mastin Ligero, a lighter and more agile type from the South. The Spanish Mastiff's coat is short, with a dense undercoat and a woolly overcoat. The coat should be brushed regularly.

Mastins are calm, dignified and serious dogs. They are not overly affectionate, although they are people-oriented dogs. Mastins are loyal, brave and courageous. They are sometimes lazy and have average exercise needs. When they are younger they may have to be taken out longer or more frequently to exert their energy. They are very protective and, like most herding breeds, have a mind of their own and are often independent and stubborn. They are very protective and can get aggressive if they feel other animals or strangers are threats to their owners or themselves.

As the largest of all of the native Spanish dog breeds, the Spanish mastiff stands at an average height of 28 to 35 inches at the shoulders and tips the scales at an average weight of 145 to 220 pounds. The smooth coat may be black, gray, reddish-brown, red or yellow. Spotted or broken color patterns may be present. The earflaps hang downward, and the long tail also hangs downward.

The Spanish mastiff is fiercely loyal toward its family. It is an alert and protective guard dog. The Spanish mastiff is patient with older children and can get along with other pets as long as it is raised and socialized with them from an early age. Spanish mastiffs are stubborn and challenging to train. This is not a dog for a novice owner and trainer. This breed requires dedicated obedience training and socialization from an early age with someone who is experienced in training and can assume the dominant role.

Wipe the smooth coat of a Spanish mastiff once a week with a grooming mitt to remove loose hair and restore luster. Inspect the ears once a week, and clean them if needed to prevent ear infections. Prevent periodontal disease by brushing the teeth at least three times a week.

Spanish mastiffs live average lifespans of 8 to 10 years. Some health problems to be aware of in this breed include hip dysplasia, cardiomyopathy, entropion, panosteitis and gastric torsion, or bloat.