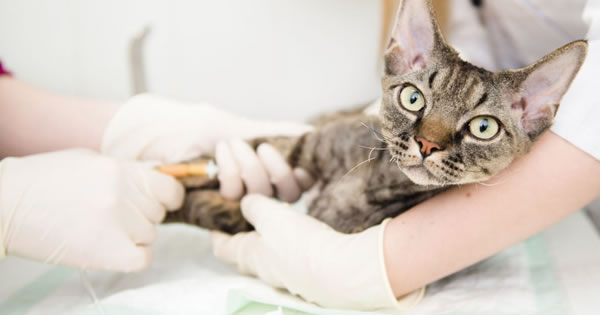 Diabetes mellitus occurs on pets when the pancreas does not produce sufficient insulin to control blood sugar or when the cells of the body become insensitive to insulin. As in people, diabetes is a very common chronic disease in dogs and cats. In some pets, there is a genetic predisposition to diabetes. Other factors, including obesity, other diseases and certain medications, can also make animals more likely to develop the condition.

Diabetic pets have elevated blood sugar, a condition known as hyperglycemia, but are unable to use this sugar due to a lack of insulin. This puts these animals into a constant state of near starvation. In addition, the extra glucose in the blood overwhelms the kidneys and causes damage to various cells in the body. Common consequences of diabetes in small animals include diabetic neuropathy and cataract formation. Neuropathy, or nerve damage, is often a result of prolonged hyperglycemia. This is especially common in diabetic cats. The condition often begins with weakness in the hind legs and progresses to a point where affected cats cannot walk or stand normally. Another possible consequence of prolonged hyperglycemia is rapid formation of cataracts. While this condition is very common among diabetic dogs, it does not occur in diabetic cats. If left untreated, diabetes mellitus can result in diabetic ketoacidosis. This is a medical emergency in which the body produces excessive ketones because it cannot utilize glucose for fuel. If not aggressively treated, this condition is deadly.

Treatment for classic diabetes mellitus in your pet involves control of hyperglycemia through diet and insulin administration. In some cases, oral medications to control hyperglycemia may also be used. Some diabetic cats can eventually be taken off insulin after good glycemic control is established, but diabetic dogs usually require lifelong insulin supplementation. Along with insulin, diabetic animals require diet and exercise aimed at weight control and maintenance of stable blood sugar levels. In diabetic dogs, a diet high in fiber is preferred, and diabetic cats usually require a diet high in protein and low in carbohydrates.

Diabetes can occur in animals of any breed, but dog breeds in which the condition is most common include the following: Miniature schnauzer, Samoyed, Miniature poodle, Toy poodle, Pug, Australian terrier, Bichon fries, Keeshund, Fox terrier and Spitz. Diabetes in cats does not appear to be closely associated with breed.