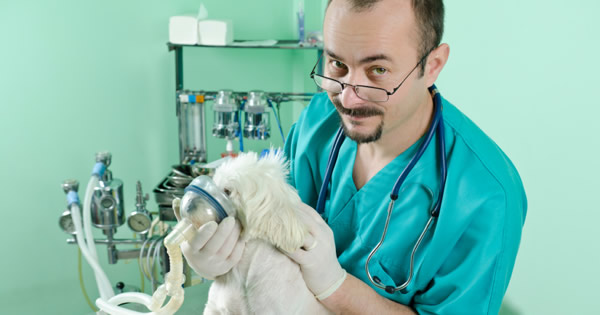 Brachycephalic respiratory syndrome, also called brachycephalic syndrome or congenital obstructive upper-airway disease, is a group of anatomical abnormalities that can make breathing difficult for brachycephalic dogs and cats. Brachycephalic animals are those pets with flat, short muzzles. These are the pets most people describe as having pushed-in faces. While this appearance is desirable in members of many canine and feline breeds, anatomical changes associated with this appearance can cause pet health problems. There are four main components of brachycephalic respiratory syndrome, but not all affected pets show all components. The components of this pet disease are as follows: * Stenotic nares: narrowed nostrils. *Everted laryngeal saccules: tissue from around the vocal folds that is sucked into the airway to obstruct airflow. * Hypoplastic trachea: narrow windpipe. *Elongated soft palate: tissue obstructing the airway.

Any of the components of brachycephalic respiratory syndrome can significantly impair breathing in affected pets, and taken together, these abnormalities can have a profound impact on an animal’s quality of life. Pets with this condition are very susceptible to heat and are more likely to suffer from heat stroke than other dogs and cats. This is especially true of dogs because dogs rely heavily on respiration to cool themselves. Also, pets with these abnormalities are exercise intolerant because increased physical activity increases oxygen demand. Due to their respiratory abnormalities, brachycephalic pets cannot meet these increased demands. In addition, these animals have an increased risk of developing airway blockages when under anesthesia. A pet with brachycephalic respiratory syndrome can also develop secondary problems due to chronically increased respiratory effort. Some of these problems include inflammation of the airway, tracheal collapse, laryngeal collapse and eversion of the tonsils.

Symptoms of brachycephalic respiratory syndrome in a pet often include one or more of the following: Difficulty breathing, Snorting, Noisy breathing, Coughing, Gagging, Exercise intolerance, Blue tongue or gums, Restlessness, Raspy bark or meow and Collapse.

The cornerstone of treatment for animals with this pet health condition is lifestyle management. Owners must make sure to keep these pets cool, manage stress and prevent overexertion. It is also important for dogs and cats with this syndrome to maintain an ideal weight. This is because increased bulk puts additional stress on their overtaxed respiratory systems. Unfortunately, weight management can be particularly difficult in these pets because they are not as active as other animals. For animals with severe symptoms, veterinarians can perform surgical procedures to correct anatomical abnormalities and improve breathing. Some common procedures include the following: Removal of Excess Tissue from the Soft Palate, Removal of the everted laryngeal saccules and Widening of the Nostrils. The procedures chosen depend on the symptoms of each patient. The earlier surgery is performed, the better the prognosis.