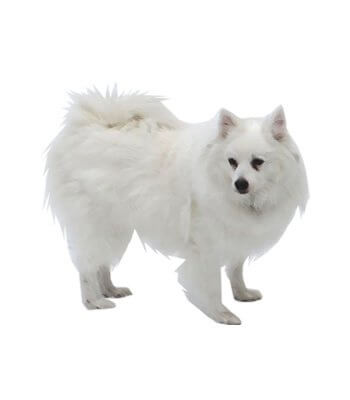 As the smallest of the three Eskimo Dog sizes, Toys stand at 9 to 12 inches, and they weigh around 10 pounds. Characterized by a fox-like face, a pair of small pointed ears, and richly plumed tails that carry up over the back, the Toy walks with a distinctive smoothness and alertness. Its voluminous coat—which is white- or white-and-biscuit-colored with no markings—consists of a short dense undercoat and a straight uncurled outer coat.

The Toy American Eskimo Dog is a high-energy dog that needs regular exercise and something to do. Otherwise it can get destructive, especially if left unattended for long periods of time. Also, thanks to its thick coat, it thrives especially in the wintertime. Its high sense of loyalty and quick grasp of new tasks enable it to be a terrific trick dog.

The Toy American Eskimo Dog has an ample double coat that is striking in appearance. Because of the sheer beauty of the dog, regular brushing and bathing is strongly recommended to maintain its appearance.

Like other sizes of this dog breed, Toy American Eskimo Dog tend to develop diseases like hip dysplasia, Legg-Calve-Perthes Disease, progressive retinal atrophy, and juvenile cataracts. Otherwise, though, they are generally healthy dogs.

Due to its origin and naming history, the Toy American Eskimo Dog has also been referred to as the American Spitz, German Spitz or Eskimo Spitz. Affectionate appellations for the dog include “Eskie” and “the dog beautiful”. The American Kennel Club accepted the American Eskimo Dog into its registry in 1994. The dog rose in popularity in circuses throughout the US in the 19th century.