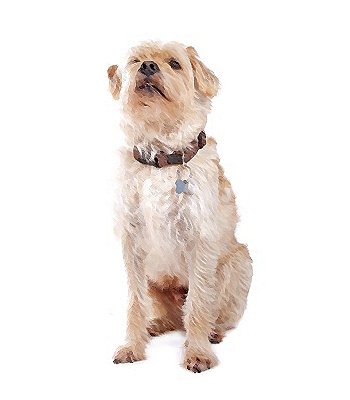 The Dutch Smoushond originates in the Netherlands, though the exact origins are unknown. Various clues, however, including its appearance and word of mouth, point to the dog being a descendent of the Yellow German Schnauzer. During the late 1800's, the Dutch Smoushond was quite popular, often referred to as the "Gentleman's companion", but was later almost pushed toward extinction in the 1940's, before and after World War II. It wasn't till the 1970's when Mrs. H.M. Barkman took and interest in the breed that it was truly revived through a selective breeding process. To this day, however, the Dutch Smoushond is almost entirely exclusive to the Netherlands. The Dutch Smoushond gained recognition from the United Kennel Club in 2006, but is still not part of the AKC.

The Dutch Smoushond is small and squarely built with a long, rough double layer coat that generally gives it an untidy appearance. The coat is straw yellow and forms a beard, mustache, and eyebrows. Their head is broad and short, with full strong jaws, large and expressive eyes, as well as small, thin, triangular ears that are slightly rounded at the tips. The forelegs are straight and firm, the hind legs flexible and muscular. Their small feet are almost cat-like, being compact and covered with hair.

The Dutch Smoushond's title of "Gentleman's Companion", was earned because of their tranquil temperament, obedient and loving nature towards their master and family. These little dogs are neither loud or hyperactive, being highly adaptable to fit any lifestyle. Generally they are very cheerful, pleasant, and friendly dogs that families can depend on. They make excellent family dogs, being gentle, patient, and playful around children and other pets. Although they are lively and active around family and people they know, Dutch Smoushonds are more reserved with strangers. This quality also makes them good candidates for watchdogs.

Taking care of the shaggy, unkempt coat is simple, requiring only biannual plucking either to be done by the owner or a professional groomer. Combing the hair regularly is also necessary as it can easily become matted. Dutch Smoushonds have a lot of energy and require vigorous daily exercise in the form of long walks. They also take well to many dogs sports including water sports, agility, and fly ball.

Compared to most purebreds, the Dutch Smoushond is a relatively strong and physically healthy small dog. They do, however, have certain health concerns that are common within the breed. Their eyes are frequently problem areas, sometimes developing cataracts or the eye lens slipping. Older dogs often suffer from arthritis as well as other joint issues. The greatest health difficulty, however, is for female Smoushonds when giving birth, these dogs tend to have a great deal of difficulty and often require veterinarian care during the process or even caesarean sections to deliver puppies.