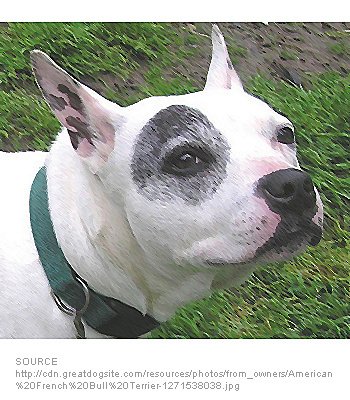 The American French Bull Terrier is a hybrid (hybrid dogs are sometimes referred to as “designer dogs”). This hybrid is a combination of American Pit Bull Terrier and French bulldog. This dog may manifest an assortment of physical and personality characteristics associated with either of the breeds from which it is derived. Some traits may be more dominant, depending on how much of each breed is found in a particular dog. An American French Bull Terrier that is a second or third generation hybrid could possess more traits associated with the French bulldog or the American Pit Bull Terrier. The American Pit Bull Terrier was brought to the U.S. no later than the latter part of the 1800s. The French Bulldog was introduced in the U.S sometime between the middle and latter part of the 1800s, as well. Thus it is not unlikely that hybrid versions of the two were created as early as the early 1900s, and possible even in the late 1800s.

The build of this hybrid varies among particular dogs. On average, this hybrid may be expected to weigh between 20 and 60 pounds. These dogs are usually muscular with a solid frame, and they are typically short.

The American French Bull Terrier is generally an affectionate dog. This type of dog does not bark excessively, so it may not be an ideal watchdog. These dogs are often intelligent, curious, and playful. They are usually interested in pleasing their owners, and they can make loyal companion pets.

These dogs seem to do well in both hot and cold climates. They are very active and require regular (daily) exercise. They do not shed a lot, and their grooming needs are minimal to moderate.

This hybrid does not usually seem to manifest chronic health problems. It may develop any of the various eye conditions associated with the French Bulldog. Overall, these dogs are quite healthy.

Because this dog is a hybrid, it might be referred to by a variety of nicknames. However, the American French Bull Terrier does not appear to have any known nicknames associated with it. An owner might call this type of hybrid a “Bully,” a “Frenchie,” a “Pit,” or a “Pittie”. Such a dog may also be referred to as any combination of the nicknames ordinarily associated with its purebred ancestors. Life expectancy approximately 12 to15 years. Coat colors vary; could be brown, white, blue, or black (or a combination of these colors). Ears often stand up straight. Tails are often very short. Coat is soft and short. Generally obedient and easy to train.