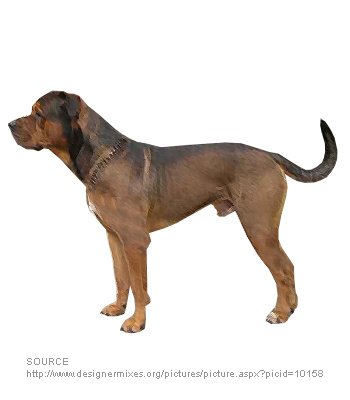 Weighing about 70 to 120 pounds, the American Bullweiler is classified as a mid-sized dog with a strong, muscular build. The head, in particular, is similar to that of the Rottweiler: deep and blocky with a good stop. The coat is usually tan, brown or red. Some dogs have yellow-brown to golden coats, and in some cases, there might be white markings on the chest and face.

Renowned as a great watch dog, the American Bullweiler has immense power and athleticism, as well as an above-average level of energy. Also, it makes for a great family companion due to its loyalty, faithfulness and protection instincts.

Much like its Bulldog ancestor, the American Bullweiler has a coat that is dense, short, resistant to extreme weather, and stiff to the touch. Plus, it does not shed a lot of hair, if any. For these reasons, the Bullweiler requires little grooming. Only occasional brushing is required to maintain the dog’s neat appearance. Moreover, bathing is only necessary for avoiding possible skin irritations and allergies.

Perhaps because of the relative rarity of the American Bullweiler, there are no significant health issues noted for this breed. However, it is strongly recommended to look up the health history of its ancestors.

This dog breed is also known as the Rottbull. Although there are no other popular nicknames for the American Bullweiler, it is subjected to many misspellings of the second part of its name. Common misspellings include Bullweiller, Bullwieler, and Bullwiller. The American Bullweiler is recognized by two dog registries: the Designer Breed Registry (DBR) and the International Designer Canine Registry (IDCR). The term ¨Bullweiler¨ is a portmanteau of the first syllable of the word ¨Bulldog¨ and the last two syllables of the word ¨Rottweiler¨.