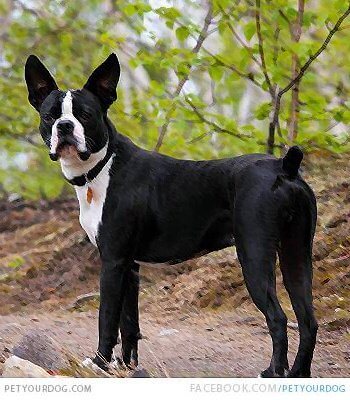 For a dog that resembles a larger Boston terrier and has the calmer disposition of an American pit bull terrier, the American Boston bull terrier may be the dog that your family is looking for. The Boston terrier and the American Staffordshire terrier, also known as the American pit bull terrier, are the parent breeds that were crossed to create the American Boston bull terrier. During the late 1900s, such hybrid crossings became popular as a means to create breeds that exemplified the favorable traits and reduced the health risks of the two parent breeds. Also known as designer dogs, hybrids differ from true mixed breeds in that two very specific purebred dogs are purposely crossed to create the new breed.

The American Boston bull terrier is a compact and muscular dog. The breed stands at an average height of 17 inches and weighs between 10 and 25 pounds. The smooth, short coat may be black and white, brindle and white, brown and white or seal in color. The tail may be long and straight, or it may be docked shortly after birth. The pointy ears stand erect.

The smooth coat of an American Boston bull terrier can be easily maintained with a weekly brushing session with a grooming mitt. A more frequent home dental care routine is needed, however. Brush the dog’s teeth at least every other day to remove the plaque that can lead to tartar accumulation and periodontal disease.