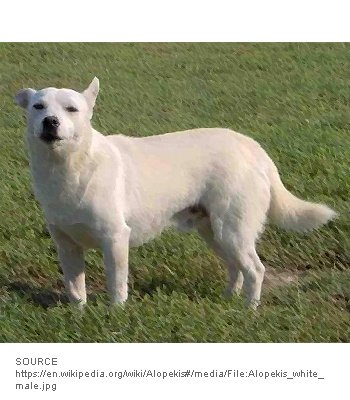 You may need to journey to Greece to find the delightful and adaptable little dog called an alopekis. The alopekis is an ancient breed that originated in Greece. It descended from primitive dogs that are depicted in Greek art and architecture that date back to the Paleolithic era. Today, the alopekis exhibits either a shorthaired coat or, more rarely, a wirehaired coat. However, a hairless variety once existed during ancient times and has since become extinct. The alopekis is plentiful today throughout Greece, but efforts are still underway to gain recognition for the breed among reputable kennel club registries.

As the name translates from the Greek language, the alopekis resembles a small fox. The muzzle is wedged and tapered, the body is longer than it is tall, and the triangular ears stand erect. The alopekis is a small breed, standing at an average height of 8 to 12 inches at the shoulder and weighing between 6.5 and 15.5 pounds. The tail is long and curved. The coat is short to medium in length. Slightly longer hairs form a ruff around the shoulders, feathering behind the forelimbs and breeches on the rear legs. The coat may be wavy or flat and shorthaired or wirehaired. It comes in every color with the exception of solid white.

The alopekis is an adaptable little dog that has a vivacious and devoted disposition. It is highly intelligent, obedient, hard working and eager to please its master. The alopekis is confident, alert and playful. It has a strong hunting instinct when it comes to rats and other vermin. The alopekis is an ideal companion. It is an agile and athletic breed that will excel in dog sports and exhibit tireless stamina on the hunting trail with its owner and in the backyard while playing with the children.

The alopekis lives an average lifespan of 13 to 18 years. The breed is hardy and has no reported genetic health problems.

The alopekis originated in Greece. This pooch is an active, playful and devoted companion. This breed stands 8 to 12 inches tall and weighs 6,5 to 15,5 pounds. This dog breed has high energy levels and requires minimal grooming. The average lifespan for an alopekis is 13 to 18 years.