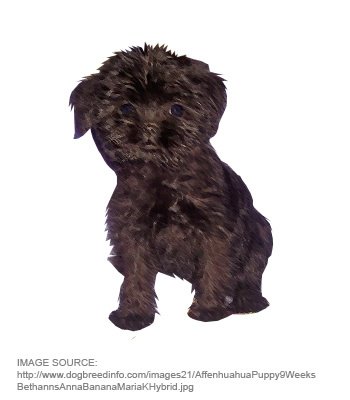 The Affenhuahua is a designer dog breed that is a hybrid between the Chihuahua and the Affenpinscher. The Affenhuahuas, although a newer breed, are very lovable and make fantastic family pets. The Affenhuahua's ancestor, the Chihuahua, was first recognized as a breed in 1904. This sassy little breed has medium energy and small size, but it doesn't require a lot of exercise. This could be because of the amount of exercise it takes for the small dog to simply keep up with long-legged humans. The Chihuaha is a Mexican breed of dog, and has become the mascot for Mexican themed fast food chain Taco Bell. Chihuahuas come in two different types of coat types; long and short hair. The other half of Affenhuahua's heritage comes from the Affenpinscher side. This breed of African terriers was not officially recognized until 1936, but is one of the most ancient of toy dog breeds. These dogs have medium energy and small size, just like their Chihuahua counterparts. Their coats are wiry. The Affenhuahua officially became a breed in 2009. For breeders, it was love at first sight when the breed emerged. Some breeders and pet owners would not consider any other type of dog.

Based on the averages of its ancestors, Affenhuahua should be between six and nine pounds and between nine and twelve inches tall. It should have a spunky, athletic build.

Affenhuahua's personality is charming. Personalities vary greatly from one puppy to another within the same litter, so each dog is unique. Overall Affenhuahua is friendly, smart, and loving. Because it is a toy breed, Affenhuahua should be supervised around children.

Affenhuahua requires a moderate amount of attention and minimal grooming. Because this type of dog has fur instead of hair, there will be moderate shedding involved but the fur will not grow past a specific length. The little beard, eyebrows, and ear tufts can be trimmed or left natural. Affenhuahua should only require a moderate amount of exercise because of its small stature.

Because of the relative newness of the Affenhuahua breed, health issues can be predicted based on its lineage. From the Chihuahua side, Affenhuahua will get nervousness and tendency toward obesity. From the Affenpinscher side, joint and skin problems are possible; however, because the breed is a mix its likelihood to be healthy increases.

Affenhuahuas are called many different things by their breeders and owners; often the word hybrid comes up, and some owners affectionately come up with personalized nicknames like deer schnauzer because of the large and adorable ears resembling those of a deer.