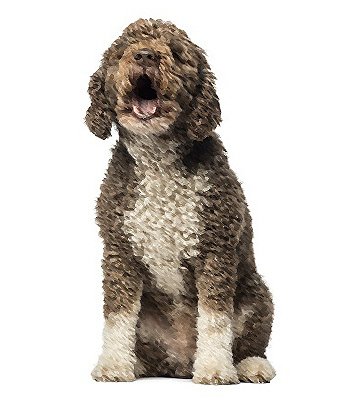 The Spanish water dog actually originated in Turkey. The dogs made their way to Spain’s Iberian peninsula aboard Turkish ships that carried sheep. In the Andalusia region of Spain, the Spanish water dog was used to herd and protect flocks of sheep and goats, to retrieve quarry for hunters and to assist the local fishermen. In January of 2015, the American Kennel Club recognized the Spanish water dog as a member of the herding group.

The Spanish Water Dog (SWD) is medium-sized, robust, muscular and athletic dog that are slightly longer than tall. Their heads are large and round, with broad muzzles. Their ears are triangular and set at medium height of the head. Their coats are furry and curly. The coat needs to be brushed regularly otherwise the coat can form cords. Check the ears regularly to prevent ear infections.

The SWD is a smart, protective and happy dog breed. SWDs are affectionate towards their owners or families, but are usually suspicious of and aloof toward strangers. They need plenty of exercise and are not suited for apartment living. Like most herding breeds, they are independent-minded and sometimes stubborn.

The athletic and sturdy Spanish water dog is medium in size, standing at an average height of 16 to 20 inches at the shoulders and weighing between 30 and 49 pounds. The curly, water resistant coat forms long cords when it is left to grow naturally. The coat may be solid black, brown, beige, white, bicolored and parti colored. The earflaps hang downward and the tail is usually docked on puppies that are bred in the United States.

A Spanish water dog’s coat should never be brushed or combed, but shearing the coat every six months will be helpful in maintaining a neat appearance. As the coat grows out, the hair will form cords. The only regular grooming maintenance to be done at home is to brush the teeth every other day to prevent periodontal disease and to keep the ears clean and dry to prevent ear infections.