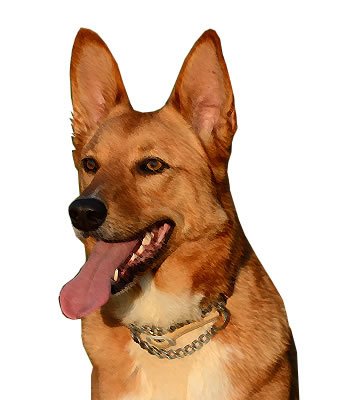 Africanis is a term used to describe indigenous dogs in South Africa, but the term is also used to refer to a narrower range of South African landrace dog types, as well. Recently, the Africanis was officially recognized as an emerging breed of dog by the Kennel Union of South Africa. While there are some variations among dogs that fall under the category of Africanis, there are also many similarities. The Africanis is known as the original South African dog, and it has evolved over centuries into a group of dogs commonly recognized today. This breed is believed to have descended from dogs domesticated in the East and Middle East many centuries ago. The dogs adapted to the landscape of South Africa. The dog is now recognized as a breed of domesticated canine, elevating it from its former status as a mongrel.

The Africanis has a slender but muscular build. This type of dog is generally somewhat longer than it is tall. Africanis dogs are typically medium in height and size. The females are usually a bit smaller than the males. An average Africanis might be approximately two feet tall and weigh between 20 and 50 pounds.

Africanis dogs are typically intelligent and friendly. They may be generally indifferent to or compatible with other household pets. They have an independent nature, and they are ordinarily alert and protective. They are often expressive, playful, and energetic, which may make them suitable as pets for families with children. Because they typically exhibit a high level of energy, they ordinarily require ample space in which to exercise and play. They are generally trainable, but some effort is required to ensure a successful training process.

The Africanis breed is known for being an easy animal to care for and groom. Africanis dogs are not typically finicky eaters. The coat of an Africanis dog is short, so it does not require much grooming. Weekly brushing and monthly shampoos should be sufficient to keep the coat in good shape.

Indigenous canines in South Africa are particularly susceptible to rabies, parvovirus, and distemper, so having them vaccinated regularly is a must. Some Africanis dogs may develop cancer. Africanis dogs are quite resistant to many common canine health issues or threats, such as parasites. Overall, the breed is a hearty, healthy one, which is probably due to the fact that it has adapted to its landscape and survived various environmental conditions over the last several centuries.

An array of nicknames may be used in relation to this emerging breed. When referring to this group of domesticated canines, a person might say “African Dog,” “Khoikhoi Dog,” “Zulu Dog,” “Bantu Dog,” or “Hottentot Hunting Dog”. The Africanis may also be called “common dog,” “traditional dog,” or “mongrel” in Swahili. Life expectancy approximately 10 to 15 years. Coat colors and patterns vary greatly, including black, brown, white, red, spotted, striped, and brindled. Makes an ideal watchdog and a great hunting dog.